Periodontology is the medical branch whose aim is to prevent periodontal disease and treat the damage it causes.

Periodontal disease affects the tissues supporting teeth and is called gingivitis (fig. 1), when it is confined to marginal tissues (marginal gingiva), or periodontitis (fig. 2) when it also involves deep tissues (the bone).

The dentist works in close cooperation with the hygienist but patient compliance is essential for a successful therapy outcome.

When the periodontal disease is already advanced, surgery may be needed to eliminate the infection and permit better oral hygiene maintenance for the patient. Only in a number of favourable cases, it is possible to reconstruct lost tissues (regeneration) while in the majority of cases it is only possible to stop the progress of the disease.

Generally, teeth treated for periodontal disease look longer (fig. 2) and create some aesthetic inconveniences but this compromise is widely compensated by the re-instatement of oral health and the possibility of preserving one’s teeth. Possible aesthetic problems or severe alterations in smile aesthetics can be solved with proper prosthetic treatments.

Periodontal surgery is also concerned with the correction of tissue deficits, such as gingival recession or resorbed edentulous areas, caused by the periodontal disease and also by traumatic aetiology and individual predisposition. Mucogingival surgery in many cases permits to solve these problems (fig. 3).

Figura 1: Gingivitis, before and after treatment. Redness, swelling and bleeding are typical of gingivitis. Gingivitis is reversible and, after the hygienist’s treatment, resolution is complete.

Figura 2: Periodontitis, before and after treatment. The end of tissue inflammation causes the recession of gingival tissues. In this case we observe a significant presence of causal factors (plaque and calculus) but often periodontal diseases are not associated to accumulations of this magnitude. 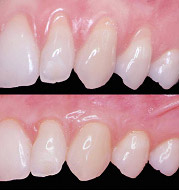 A periodontal pocket is the loss of supporting tissue of a tooth. Pockets are assessed through periodontal probing and bleeding on probing. Pocket treatment entails washing it and removing it with both non-surgical and surgical techniques.

Therapy for the pocket consists of cleansing and removing it through non-surgical and surgical techniques.

Any cookies that may not be particularly necessary for the website to function and is used specifically to collect user personal data via analytics, ads, other embedded contents are termed as non-necessary cookies. It is mandatory to procure user consent prior to running these cookies on your website.